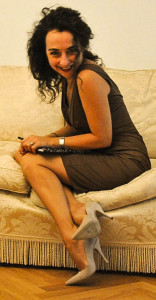 Giada Trebeschi was born in Reggio Emilia in 1973 but grew up in Bologna.
She writes novels, short stories, essays, screenplays and theater scripts that she sometimes likes to take on stage herself. Her career at university she finished with two MA, one in languages and literature, one in history of art and a Ph. D. in history. After having worked in university as Historian for nearly ten years, she decided to dedicate herself totally to writing, while still she is a passionate scientist.
In 2012 her novel La Dama Roja has been published in Spanish by Boveda, Algaida; in 2014 followed the Italian version, La Dama Rossa, with Mondadori.
She speaks five languages, lived in Switzerland for many years, moved to Spain, back to Italy and, at present enjoys living in Germany.