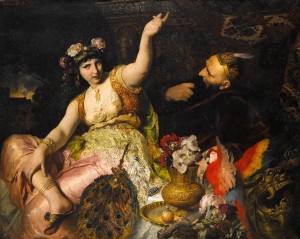 Scheherazade knows how to intrigue a man’s mind and she uses both her body and wit to tame the love labour’s suffering king. She may be compared to some of the well-known Venetian courtesans of the XVIth century that could deal with the most important men of their period being practically the sole women accepted to speak freely about politics, war, religion and love.
Scheherazade does all of it and more, because with her stories, she allows herself to go beyond any border including those of reality in order to amend Cruelty and Hate through the power of Words.
She is a woman that enchants with far more than physical pleasure, she is a story-teller that intoxicates with the perfume of fantasy and literature. 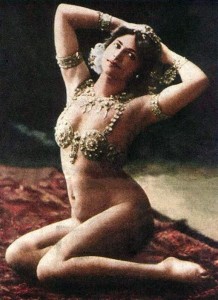 Fantasy that leads to the ways of a magic world where everything is possible and literature that brings to the paths of an allowed voyeurism that shows the life of the others.
For one thousand and one nights she guides the voyage of all those willing to listen into a world made of such fantastic and, at the same time, so human characters that it is sometimes difficult to recognize the border in between fantasy and reality; she accompanies the listener into a world made of extraordinary stories that, beside a great entertainment, they become source of important teachings.
It is for this that the fame, the long life and in particular the power of One thousand and one nights can be considered completely belonging to Scheherazade, the storyteller that every writer wishes to be.